skip to main | skip to sidebar

Nuke the Site from Orbit...

Aliens.  One of the seminal, defining sci-fi combat movies.


These were a prize for participating in the polls at The Miniatures Page a while back.  Rather, I received a voucher worth 10 British pounds from QRF, so this is what I chose.

They are a bit rough around the edges, neither the cleanest castings in the world, nor are they the worst. 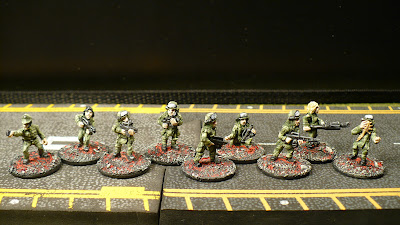 I like Ripley (above, 2nd from left), and the guy getting his face eaten (although, like prone figures, I find it useless for actually gaming with it).  This squad has silvered visors. 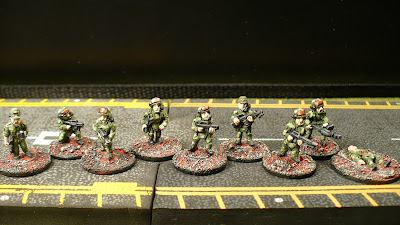 The casualty figure is useful, though.  And I like the officers.  This squad has coppery visors, to differentiate them from Squad Silver.

I painted two squads (of 9 figures each, one including Ripley).  If you leave off the dead guy and the soon-to-be-dead guy, you get 8 troopers for a squad.  It should be easy enough to make that work in a set of rules.  I'm pretty sure 5150:  Star Army by Two Hour Wargames uses 8-man squads.

I also painted a nice camoflage pattern on their uniforms, but it doesn't seem to show up in the pictures very well. 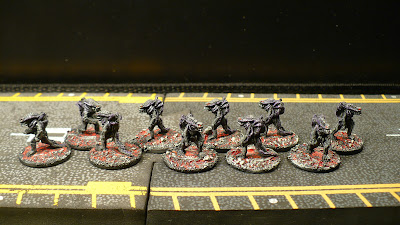 The Aliens are pretty cool.  Of the "normal" sized Aliens, there are 3 the same and the other 7 are the same, so two poses, but they're very similar so it's difficult to tell a difference at first glance. 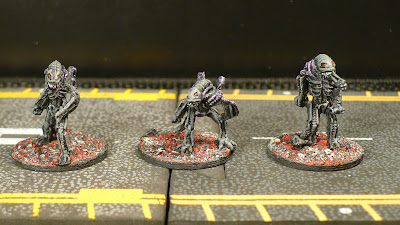 The three "big" Aliens are good for being "big" in 15mm scale, or just as normal scary Aliens in 25-28mm scale.  It should probably only take 3 Aliens to wreak havoc anyhow. 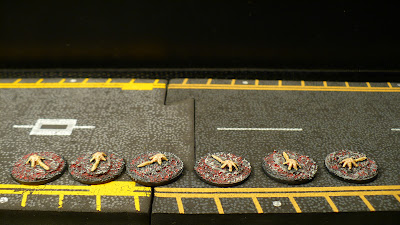 The facehuggers look nice and slimy, and creepy crawly.  Not much else to say about them, really.

And now, a dramatic battle scene! 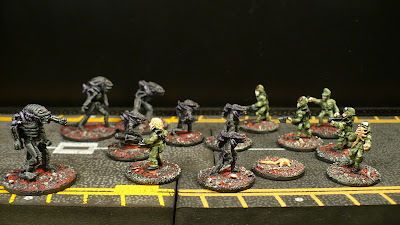 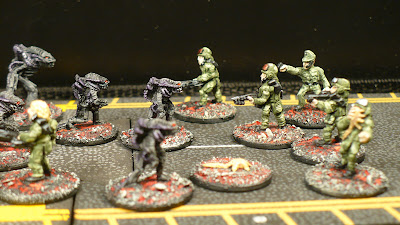 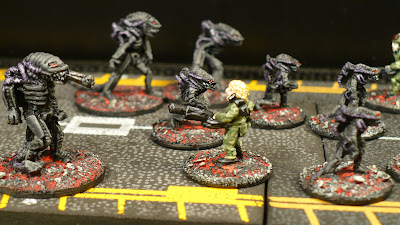 It took me 10 hours to paint all 37 figures, including their bases.  I love 15mm for this very reason, it's so fast to get on the table.  I have been spending 8 hours just painting five 28mm figures, so this is much faster.  It helps that the Aliens are mostly black, too.

I didn't want my "traditional" green base this time, so I went for a more alien-planet-volcano feel.  The trouble with that is, I don't have any alien-planet-volcano terrain to play on (just green cloth and desert cloth).  Ah well, now I have a new project:  make some!

I know this blog has been neglected over the last year.  15mm has taken a bit of a back-seat on my painting table.  I have sooo much more 28mm scale stuff to finish, that I actually haven't even bought any 15mm stuff at all.  I'm all caught up with 15mm.  But man!, the Khurasan and Rebel Minis and 15mm.co.uk stuff really tempts me.  I will be returning someday!

Thanks for looking.
Posted by Kelroy Was Here at 11:46